Have you experienced persistent stiffness or pain in the hips or groin, especially during movement? Are you under forty years of age? These symptoms can be frustrating to live with long-term, and you may like to get an expert opinion on how the pain or stiffness can best be treated.

These symptoms are sometimes caused by a condition known as femoro-acetabular impingement, and if you would like some help in determining whether this is what you have, and how best to manage the condition, our multi-disciplinary team at Circle Health will be happy to help you.

What is Femoro-acetabular impingement?

Your hip is described as a being a ‘ball and socket’ joint. It is formed by the upper part of your thigh bone (the femur) fitting into the part of your pelvis that looks a bit like a shallow cup (this part is called the acetabulum).

Femoro-acetabular impingement (FAI) is a condition in which extra bone grows along the femoral head (the top of your femur) or the acetabulum. These bone growths, or ‘bone spurs’, give the bones an abnormal shape, causing friction between the joints during movement.

This can then result in stiffness and/or pain in your thigh, hip, groin, or lower back, as well as a lack of flexibility in extending your hip beyond a right angle. You may find that turning or twisting at your hips exacerbates the pain. Over time, if left untreated, the repetitive friction on the joint can cause damage to the cartilage.

There are two main types of impingement:

Both conditions can exist in conjunction with each other, resulting in a Combined impingement. 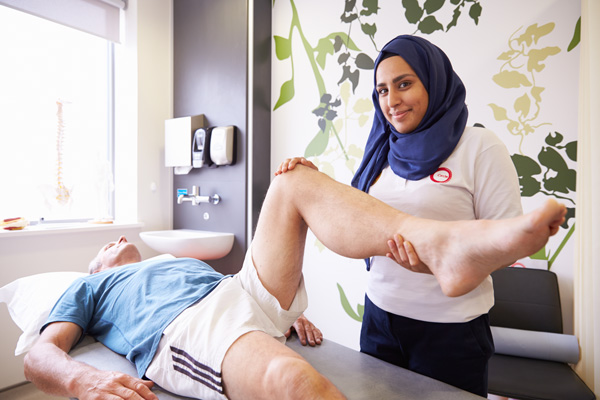 What does treatment involve?

Non-invasive measures are often an effective form of treatment, particularly changes to your sitting posture and sporting activities, and our dedicated physiotherapy team can help you implement these changes into everyday life. You may also wish to use anti-inflammatory medicines alongside this for pain management.

Low-impact exercise such as walking or swimming can help to maintain mobility, but it is usually advised to avoid activity where there is greater impact on your joints, such as running or weightlifting.

Sometimes, rest or cutting out a particular physical activity can help to manage the condition, but should problems and pain persist a physical examination by our specialist team is advised.

In this examination, one of our orthopaedic consultants will perform an Impingement Test, checking your range of movement, so as to determine what kind of impingement it is. X-rays and scans using our state-of-the-art equipment will usually be required if pain persists after non-surgical management strategies, but only in cases where there is a significant impact on quality of life.

Will I need surgery?

If your quality of life and ability to take part in sporting activities has been significantly impacted by the condition, and non-surgical management strategies have yet to make a noticeable difference, a hip arthroscopy (keyhole surgery) may be considered.

When it comes to hip surgery, we have two main priorities:

A hip arthroscopy will usually be carried out under general anaesthetic, and most impingements can be corrected this way. It is a common procedure and you will often be able to go home on the same day if you have been admitted as a Day Case patient.

An arthroscope is a small, flexible tube about the length and width of a drinking straw which contains a light source and a digital camera that sends images to a video screen or your surgeon's eyepiece. Under general anaesthetic, this is inserted into your hip joint to allow the surgeon a clear view inside the joint. They are then able to repair any damage to the cartilage as well as trimming any bony spurs that may be causing pain.

Following your operation, our physiotherapy team will be there to help and support you during the two-three months typically needed for full recovery.

Book an appointment with one of our orthopaedic surgeons today

If you’ve been struggling with stiffness, mobility issues, or pain in the hip, make sure to come and talk to one of our specialists. Our staff are experts in their field, and their main focus is on getting you treated and moving again quickly and safely.

If you’ve been dealing with pain and lack of mobility in your hip for a while, the last thing you want is to have to wait any longer for it to be treated. At Circle, we have no waiting lists, meaning that you can be seen by one of our specialists promptly and receive any treatment you need without undue delay.