There are numerous causes of knee pain, some more common than you might think.

The main cause of knee pain in adults over 45 is Osteoarthritis, while in those under 45 it is injury. In both cases it is most commonly mild and self-limiting. In these case self-management will often be all that is necessary. Below are listed some self –management strategies.

If it is a more severe pain or injury with swelling, inability to weight bear or loss of function an opinion should be sought from your doctor, physiotherapist or health practitioner.

In the vast majority of cases, knee pain is a result of biomechanical factors, degenerative joint processes or traumatic injuries to the knee.

Some examples of inflexibility causing faulty biomechanics include inflexibility in the hamstring muscles at the back of the thigh or the calf muscles. This can result in excessive ankle and foot rotation known as pronation as well as increased knee flexion during activities such as walking, climbing stairs and during sporting activities.

Stiffness in the hip flexor muscles, iliotibial band and quadriceps muscles may result in excessive rotation at the hip and knee due to the pull of these structures on the outer sorry and knee. This can also result in a sideways tilted or upwards glide to the patella resulting in at patellofemoral pain.

Why does my knee catch or lock?

Pseudo-locking of the knee is when the knee is able to fully extend but catches or clunks in to this position. The most common cause for this symptom is significant knee stiffness after the knee has been held in a flexed position for a prolonged period of time.

Other specific causes of catching symptoms to the knee include an inflamed or thickened tissue which sits to the sides of the patellar known as plicae. As the knee extends this tissue can become trapped between the front of the knee joint and the patellar causing a sharp pain and sometimes an audible clunk. Patellar instability or osteoarthritis may also cause a catching of the knee as the alignment of the patellar may not be central to the groove (that it normally slides up and down in) as the knee flexes and extends.

True locking reflects a situation when the knee is totally unable to extend fully from a flexed position or needs to be manually manipulated in to an extended position. This is actually a very rare situation and often occurs following a significant knee trauma. The cause may be an unstable tear in the fibrocartilage structures known as the menisci or a detachment of part of the menisci or the bony hyaline cartilage which forms the joint surfaces. Even more infrequently there may be a fracture to the knee joint surfaces. 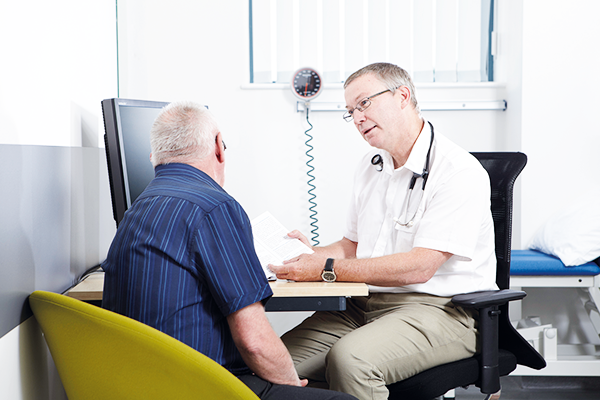 Can knee pain be linked to a problem with the lower spine or hip?

Many people will be familiar with the term sciatica which is the medical term given to pain in the leg arising from the sciatic nerve. The femoral nerve is the other major nerve formed in the lower spine and this nerve travels over the side and front of the hip and across the front of the knee. In rare circumstances irritation or compression to this nerve can occur in the lower spine, causing knee pain.

In these cases, the pain is often felt as a burning, hypersensitivity or shooting/electric sensation which may be associated with a degree of pins and needles or numbness. Compression of the femoral nerve can also cause weakness in the thigh muscles. Often pains radiating from the lower spine may be made worse with bending, lifting or carrying along with prolonged activity in one position such as sitting, standing or walking. When a problem with the lower spine or femoral nerve is a suspected cause of knee pain, an MRI scan of the lumbar spine may help in diagnosing the problem.

Hip joint conditions such as hip osteoarthritis and hip impingement syndrome are also known to cause significant knee pain. In some cases of hip osteoarthritis there may be no hip pain at all but normally there will be a pain or stiffness in the groin region. Often pains radiating from the hip joint are made worse with prolonged sitting, particularly when initially standing after sitting. When hip joint osteoarthritis is a suspected cause of knee pain an X-ray of the hip joint may be useful.

Can knee pain be associated with more widespread medical problems?

In rare cases, knee pain may be associated with an underlying immune system problem. There are many forms of auto-immune disease which can affect the knees. The most common is rheumatoid arthritis which normally affects both knees at the same time. Other autoimmune system disorders include psoriatic arthritis and lupus.

Knee joint infections are a very rare occurrence but may be suspected in patients who have undergone recent surgery or a knee joint injection. For individuals with a lowered immune system response such as those with certain forms of cancer, during or after certain types of immunosuppressant medication or chemotherapy the likelihood of suffering a knee infection will be much greater.

A process known as osteonecrosis may affect the knee joint which leads to loss of bone mass due to a lack of blood supply. This condition normally affects individuals who have suffered a trauma or who have risk factors such as metabolic problems or who have been on courses of steroid medication in the past/present.

Due to the nature of these conditions, symptoms may be widespread throughout many joints of the body and individuals may feel flu like symptoms at this time. The symptoms may also be more constant and unrelated to activity, worse through the night or associated with swelling, heat or redness. If you feel any of these symptoms, it is advisable you seek a more urgent medical opinion.

Knee pain – what you need to know