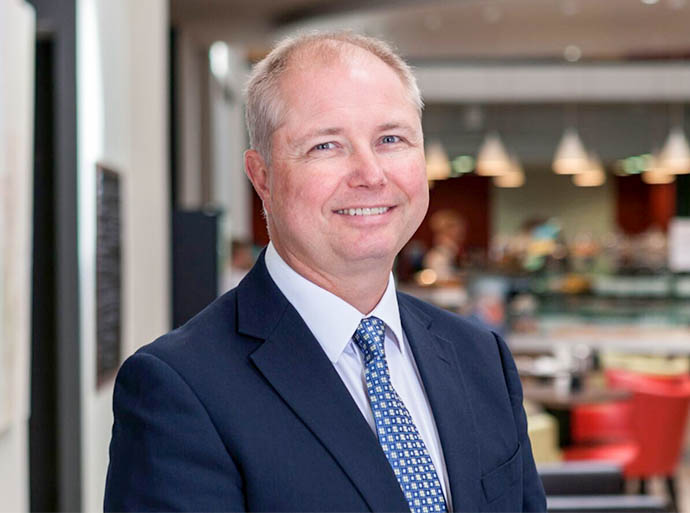 Mr Andrew Chambler is an Orthopaedic Consultant and Specialist Shoulder surgeon at CircleBath Hospital. He leads the Upper Limb unit and is referred patients from the south west of England as well as internationally from countries such as Pakistan and Bahrain. Currently, he is also Clinical Chairman of Circle Bath Hospital. He is a specialist in shoulder and elbow surgery. A large part of his practice is made up of shoulder and elbow joint replacements and tendon problems.

He trained at St Mary's Hospital in London, followed by the Northwest Thames Orthopaedic rotation program. His Master of Surgery was undertaken at Imperial College. He is fellowship trained in shoulder and elbow surgery from the Nuffield Orthopaedic Centre in Oxford. He has been awarded travelling fellowships to Europe and the Mayo Clinic in the USA to further developed his experience in shoulder and elbow disorders.

Meet Andrew Chambler in the film here where he discusses shoulder replacement.

In his spare time, which seems to be ever decreasing, Andrew enjoys spending time with his wife Jemma and five children. He tries to stay active with tennis and skiing, although his older children are now much better than him in both disciplines.

Mr Chambler sees both NHS and private patients at CircleBath. He is a reviewer for the international Journal of Shoulder & Elbow surgery and as well as British Elbow and Shoulder Society’s journal – Shoulder & Elbow. He was priniciple investigator at site for several multi-centre clinical trials for the best management of common shoulder conditions.

A serious shoulder injury stopped bus driver Paul Spice being able to work. In constant pain, and frustrated with his lack of recovery, he was referred to Circle Bath for help. Read Paul’s story here.

Many people on holiday in Vietnam would expect to relax, make memories and enjoy spending time with their family. However, for bus driver Paul Spice, a shoulder injury meant that his holiday experience was less than ideal.

While pulling himself from the sea onto a large inflatable platform, Paul felt an unexpected pain in his shoulder. “I just felt something in the shoulder go,” says Paul. “While it wasn’t an excruciating pain, it was bad enough to stop me doing quite a few of the activities I’d been looking forward to. In fact, for the rest of the holiday I found myself deliberately limiting how much I moved my arm in the hope it would prevent more pain.”

Despite the injury, Paul was able to return to work when he returned from holiday. Unfortunately, a fall on a hard floor one evening aggravated the shoulder pain to an entirely new level. The pain was so severe that he wasn’t able to cover his work shift on New Year’s Eve, and an MRI scan of his shoulder showed a tear in a tendon in the shoulder. As the new year began, Paul suddenly found that he was no longer medically fit to work.

As the pain continued to develop over a number of weeks, and with no obvious sign of recovery, he was referred by his GP to a specialist. Within a week, he was meeting with Andrew Chambler, an Orthopaedic Consultant and Specialist Shoulder surgeon at Circle Bath.

“When I first saw him, Paul was in obvious pain,” recalls Andrew. “Examination of his shoulder showed very clearly that it was much weaker than normal. He also had a limited range of motion in it, probably because he hadn’t been using it as much as normal.”

The previous MRI scan had been sent over electronically, allowing Andrew to confirm a diagnosis. “The MRI scan showed a nasty tear in the main tendon of the shoulder. There was also a lot of inflammation around the tear. I talked about the scan results with Paul and explained that the best way to treat the problem, in my experience, would be for arthroscopic shoulder surgery to repair the damaged tendon.”

Arthroscopy is a form of keyhole surgery, using small cuts to access the joint. During the surgery, a thin metal tube about the size of a pencil is placed into the shoulder joint through a small cut. This tube is known as an arthroscope and has a light and camera on one end, allowing the surgeon to see inside the joint itself. Additional small surgical tools can be introduced into the joint as needed by the surgeon.

After discussing and considering the options, Paul decided to go ahead with surgery. Andrew was able to repair Paul’s damaged tendon and reduce the inflammation in the shoulder joint, all of which helped to significantly reduce the pain.

Recovery from any surgery takes time, and Paul found the first three months were hard. “For the first 3 weeks, my arm needed to be kept in a sling, which was a bit frustrating,” he recalls. “The Circle physiotherapist was very helpful showing and teaching me the best exercises and movements that I needed to carry our regularly to help get the strength and movement back in my shoulder. It wasn’t always easy, but it was an awful lot better than the pain I was in before surgery!”

Following the operation and physiotherapy, Paul now has near full range of movement in his shoulder. In addition, the pain has been significantly reduced and he has been able to return to work. As Andrew says, “After the surgery, Paul was incredibly diligent in carrying out all of the physiotherapy he was advised to do. Physiotherapy makes a real difference to the speed and extent of recovery, and the fact that Paul has recovered so well is a testament to how much work he has put in. I fully expect the improvements in his shoulder will continue in the future.”

As for Paul, he continues to be grateful for the help he received at Circle Bath. “When I first walked into the entrance foyer, I remember thinking ‘Is this really a hospital?’” he laughs. “It was so clean and quiet. And to top it off, my appointment was on time!”

Asked what he would say to somebody suffering from shoulder pain, Paul’s reply is immediate. “See Andrew Chambler at Circle Bath. I cannot praise him, or the rest of the staff, enough. I was in pain every single day. Thanks to Andrew and the team at Circle Bath, I am now pain-free and able to use my shoulder like normal. They have given me my life back and I am so grateful to them.”